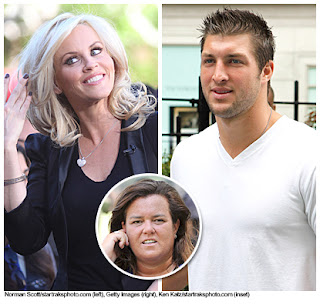 Rosie Sets Up Tim Tebow With Jenny McCarthy, Rosie plays matchmaker for Tim Tebow, The talk show host convinces the QB to exchange numbers with a former Playboy Playmate. Tim Tebow doesn't need much help getting ladies interested in him, but the NFL star had a surprising matchmaker set him up with a former Playboy Playmate.
Talk show host Rosie O'Donnell has introduced the Denver Broncos star to TV personality Jenny McCarthy. In Touch Weekly reports during a radio interview before the Super Bowl in Indianapolis, McCarthy revealed to Rosie that she was "newly single" and "had a crush on Tim Tebow."
Following the interview, O'Donnell noticed Tebow was nearby doing an interview on radio row. Rosie grabbed McCarthy by the arm and strolled over to Tim Tebow when according to In Touch Weekly she said: "Hi, I’m Rosie O’Donnell and this is Jenny McCarthy and she’s single. I think you two would be perfect together. Now exchange telephone numbers." Rosie then walked away.
The tabloid magazine reports the pair did indeed end up having a conversation and exchanging numbers before Tebow, 24, had to get back to yapping on random sports radio shows.
McCarthy, 39, who dated actor Jim Carrey for close to five years, thanked Rosie for playing cupid and will now wait to see if Tebow gives her a call.
This may not be a love connection, but hey, nobody gave the Broncos a chance to beat the Steelers in the playoffs either!
via: tpg
Posted by News Hump at 09:35