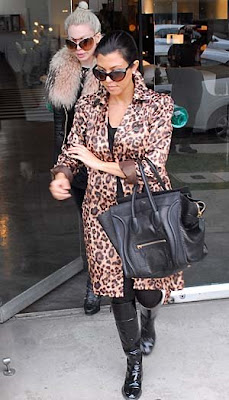 Report: Pregnant Kourtney Kardashian is Expecting a Girl, Kourtney Kardashian, who's pregnant with her second child with boyfriend Scott Disick, displayed her growing baby bump Tuesday as she indulged in one of the Kardashian girls' favorite pastimes, shopping, on L.A.'s Robertson Boulevard. The most fashionable member of the "Keeping Up With the Kardashians" clan was chic as usual in a leopard-print trench coat -- that did its best to camouflage her bump -- black boots and a tote, a sleek ponytail, and, of course, dark shades.
Even Kourtney, 32, who's reportedly four months along, admits that her belly is bigger at this point in her pregnancy than it was while carrying her son Mason, 2. "They say that with your second pregnancy, your body remembers and knows what it's supposed to do, so you show faster the second time around. I guess that is true!" she wrote on her blog Tuesday. "I am definitely showing faster than last time and loving it. Pregnancy is such a beautiful thing."
While Kourtney has yet to reveal the baby's gender, the latest issue of Life & Style is reporting that a friend of the reality star says it's a ... girl! "Kourtney was hoping for a girl," the source tells the magazine. "She loves having a boy but thinks having a girl would be perfect so she can dress her up and show her the ropes in life."
Despite the "friend's" comments, a rep for Kourt insists that "Kourtney and Scott do not know yet what they are having."
Whatever the case, you can bet Kourtney and Scott will be announcing the baby's gender soon, and most likely on reality TV!
via: yahoo
Posted by News Hump at 09:27