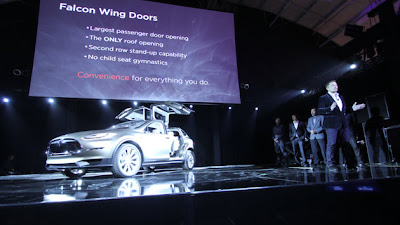 Based on the same platform as Tesla's electric Model S sedan that's slated for delivery to customers in July (and available with 60 or 85 kWh battery packs), the Model X breaks new ground for EVs with its fore-and-aft motors. As for expected performance, Musk claimed that the Model X will accelerate from zero to 60 mph in 4.4 seconds, which he noted is quicker than a Porsche 911. After taking a ride in a prototype, I can confirm that the Model X feels sporty even by sports car standards. The prototype was fast in a straight line and exhibited very little body roll while cornering, thanks to a low center of gravity imparted by the batteries' in-floor location.
Like the Model S, pricing will be in the $50,000 - $75,000 range, depending on equipment (the dual-motor all-wheel-drive system is optional; base configuration will be rear-wheel drive). Interested parties can begin placing deposits at noon, February 10, through Teslamotors.com. Musk says that production on the 2014 model will begin in late 2013.
During the Model X's official introduction, the front trunk, or "frunk" latch did not release—the presentation's only notable hitch—but Musk seemed unperturbed. He demonstrated the utility offered by the "falcon wing" doors by standing upright in the second row. When later asked about inevitable comparisons to John Z. DeLorean's infamous car, Musk replied: "If I had a dollar for every time somebody compared me to DeLorean, I wouldn't have needed an IPO."
via: yahoo
Posted by News Hump at 09:46