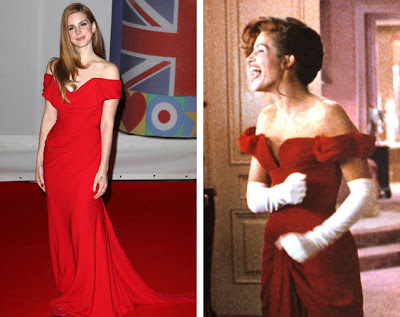 Lana Del Rey channels red 'Pretty Woman' dress, Lana Del Rey channels Julia Roberts’s red dress from ‘Pretty Woman’, The 'Video Games' singer steps out in a dress that closely resembles the gown Julia Roberts made famous. Lana Del Rey looked like a pretty woman at the BRIT Awards on Tuesday night. The "Video Games" singer wore a poppy red, floor-length Vivienne Westwood gown that recalled Julia Roberts's famous red dress from "Pretty Woman."
The two dresses share not only the same colour palette, they also boast a plunging dart neckline, off-shoulder sleeves, and a gathered waist.
In the 1990 film, Roberts sports the number (created by costume designer Marilyn Vance) for a visit to the opera, pairing it with long, white gloves.
But one of the most famous frocks in history almost wasn't.

"Did you know that it almost wasn't red?" Vance told Elle magazine two years ago. "The studio really wanted black, but I knew it needed to be red."

Vance created three different versions and shot Roberts in each one, but with the "right shade" of poppy, she eventually managed to "convince everyone to go my direction."

Thankfully for Del Rey, it seems as though her version of the red gown brought her some luck: The singer won the International Breakthrough Award last night, her first BRIT.