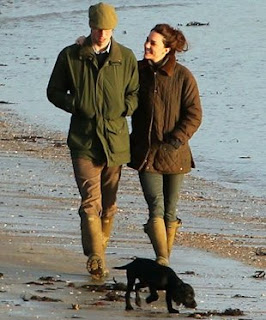 Kate Middleton reveals new puppy's name, Kate Middleton Finally Reveals Her Dog's Name. It's Lupo, The Duke and Duchess of Cambridge have given their cocker spaniel a bit of Italian flair. The newest member of the royal family has been named. All hail Lupo, the 3-month-old Cocker Spaniel, Kate Middleton and her husband Prince William adopted a few months back. The puppy was part of a litter bred by Middleton's mom, Carole.
Like much of Kate and Will's personal life, the puppy's name remained under wraps for some time.
"He is a private pet and they do not want his name to be made public although the couple are happy to confirm that they do, indeed, have a new dog," a spokesman at St. James's Palace told the Daily Mail.
But during a visit to an Oxford elementary school this week, Middleton let Lupo's name slip to a classroom full of kids. Before you could say 'doggy steps', the pet was making international headlines.
It's not exactly royal baby news, but with the couple reportedly taking their time on the road to parenthood, Lupo's introduction is like a soft launch. If the dog's name makes worldwide news, the announcement about Kate and Will's future child will shut down the internet.
So why the name Lupo? The name means wolf in Italian. Like his fellow royal family members, the dog is named after a hallowed relative. Lupo also comes from a long line of hunters, just like William, so the little guy will fit right in with his new family.
Well sort of. The Queen probably would have preferred her grandson stick with another breed. Corgis are Elizabeth's favorite , ever since her dad brought one home named Dookie (I kid you not). She adopted her own Corgi, named Susan (another genius name!) at 18 and has had up to seven at a time following her around the palace and accompanying her on various royal expeditions.
Royal pets share some of the same duties and luxuries as their owners, posing for oil-painted portraits, getting carted around by personal aides from limo to luxury liner. But things can also get weird on the Palace grounds. Elizabeth used to make her own "Dorgis" breeding her Corgis with a dash of the late Princess Margaret's own Daschund. Meanwhile, Princess Anne's English Bull Terrier became a Palace public enemy in 2004, after he mauled one of the Queen's beloved pets. Lesson one for Lupo: Not every member of the royal family plays nice.
via: yahoo
Posted by News Hump at 12:59