'Lava eruption' is trick of the eye

'Lava eruption' is trick of the eye 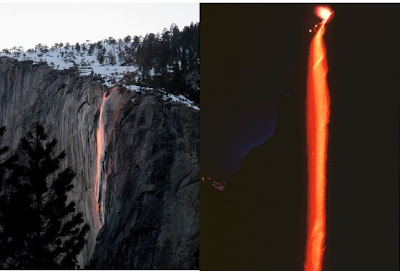 'Lava eruption' is trick of the eye, Yosemite Park 'lava eruption' is a stunning trick of the eye, What looks like a trail of fiery lava cascading over a cliff is really a stunning trick of the light. It is a phenomenon that wouldn’t look out of place on top of Mount Etna. The fiery-looking trail below may appear to be a blast of molten lava, but it’s actually a cascade of water illuminated by the sun.
The wonder at Yosemite National Park, California, appears only at sunset during a select window of time in mid-February and is keenly awaited by a number of photographers and spectators.
Weather permitting, the effect is created by a precise alignment of the sun and earth which makes the Yosemite Park’s Horsetail Fall turn a bright, fiery orange.
The vibrant colour is the result of the sun’s rays reflecting off granite behind the falling water and is dependent on a clear sunset.
Horsetail Fall drains an area of the El Capitan rock formation, which stretches up to 3,593ft above the Yosemite valley.
Michael Frye, author of the book, The Photographer's Guide to Yosemite, said: "Horsetail is so uniquely situated that I don't know of any other waterfall on earth that gets that kind of light.
"How many are perched on a high open cliff? Most are in an alcove or canyon and won't get the sun setting behind it. Yosemite's special geography makes this fall distinctive,” he said.
"If you hit it at just the right time, it turns this amazing color of gold or red-orange”.
Park officials believe it will last until February 24, with the best views east of the peak at the El Capitan picnic area.
The incredible sight was first captured in colour by the natural world photographer Galen Rowell in 1973.
via: yahoo
Posted by News Hump at 04:53