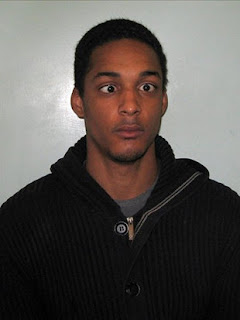 Unusual cross eyes snare CCTV rioter, CCTV snares cross-eyed arsonist, A masked rioter was caught and jailed after officers spotted his distinctive crossed eyes. A cross-eyed arsonist who set fire to a shop and post office during the August riots has been jailed for eight years, after police spotted his unusual eyes on CCTV. Andrew Burls, 23, started blazes at Regen's Lingerie boutique in Rye Lane, Peckham, south London, and a post office in the same street, during riots that spread across the capital last year.
The damage cost more than £1 million and left six people homeless.
Despite covering his face, officers combing through CCTV footage spotted Burls, of Purdon House, Peckham, because of his distinctive crossed eyes.
The 23-year-old originally denied the offence, but was jailed for a total of eight years at Inner London Crown Court after pleading guilty on January 30 to two counts of arson being reckless as to whether life was endangered, and one of burglary with intent to steal at Iceland in Rye Lane, a court official confirmed.
Southwark Council welcomed the sentence and confirmed that Burls had voluntarily given up the tenancy of his council flat in Peckham.
Peter John, leader of Southwark Council, said: "Andrew Burls has admitted to setting fire to businesses in Peckham during August's disorder.
"His actions cost more than £1 million in damages to local shops, caused immense distress to their business owners, left six people homeless and terrified a close-knit and peaceful community.
"I'm sure that many people who live and work in Peckham will be satisfied that this sentence is appropriate and reflects the seriousness of his crime and the impact it has had on the community."
via: yahoo
Posted by News Hump at 05:00