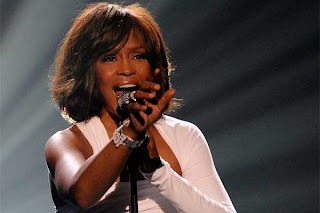 Whitney Houston Dies At Beverly Hilton, Whitney Houston dead at 48; celebs react on Twitter, Singer Whitney Houston's death Saturday at age 48 had few details immediately available, but celebrities on Twitter were quick to respond. Russell Simmons said he was "deeply saddened by the death of Whitney Houston...may she rest in peace."
"Just heard the news. so crazy," tweeted Justin Bieber. "One of the GREATEST VOICES EVER just passed. RIP Whitney Houston. My prayers go out to her friends and family I am sadden to hear of the passing of Whitney Houston today..."
Melanie Amaro, who won the first season of "The X Factor" and recently belted out Aretha Franklin's "Respect" for Pepsi, tweeted, "I love u sooo much Whitney Houston :'( u will always be in my heart and my mind an my soul your music made me the girl I am today :("
"Is the sad news about Whitney Houston true?!?!," singer Michelle Branch asked early on.
Houston died Saturday afternoon at the Beverly Hilton hotel, authorities told L.A. Now. Houston was in the Los Angeles area for a musical tribute to music executive Clive Davis and had performed and spoken to reporters earlier in the week. The investigation into her death was ongoing.
"Wow. RIP Whitney Houston. Grew up on her," actress Elizabeth Banks said. "She contributed to the soundtrack of many of my 12-year old sleepover parties."
"So so sad that Whitney Houston died..," Kris Jenner said. "praying for her daughter and her family...tragic..just heartbreaking..amazing talent, amazing voice.."
TV host Nancy O'Dell kept it simple: "I am in shock and so sad...Whitney Houston reported dead."
"RIP Whitney Houston. Sad to see anyone go so early. My thoughts and prayers go out to her friends and family," said actress and TV host Olivia Munn.
"Whitney Houston is dead. A beautiful & talented woman RIP Whitney," said author Jackie Collins.
CNN's Roland Martin, recently in the news over a Super Bowl tweet, noted that "Clive Davis has his annual Grammy party tonight. Something tells me it will be turned into a Whitney Houston memorial service."
In fact, Houston was to have attended that party Saturday night at the Beverly Hilton, L.A. Now reports.
And one touching non-celebrity tweet, from writer Jordan Bach: "May the wings of angels encircle Whitney Houston. Gratitude for her gifts, sorrow for her agony, and prayers for her release at last."
[UPDATED, 6: 30 p.m. Feb. 11: Fellow diva Mariah Carey expressed her condolences over a series of tweets, saying, "Heartbroken and in tears over the shocking death of my friend, the incomparable Ms. Whitney Houston. My heartfelt condolences to Whitney's family and to all her millions of fans throughout the world. She will never be forgotten as one of the greatest voices to ever grace the earth."
Her husband, Nick Cannon, noted, "'To be absent from the body is to be present with the Lord' RIP to Whitney Houston a true queen."
And more celebs weighed in:
Nick Lachey: "How tragic to hear about Whitney Houston's passing. Such a shame. She had one of the most iconic voices of my lifetime. #rip"
Wendy Williams: "My family & I are saddened by the loss of a true icon & legend - Whitney Houston. Our thoughts & prayers are w/ the entire Houston family."
Dwyane Wade: "RIP to a legend..Sad day for music lovers...Whitney Houston should be celebrated 4 blessing us with her gifts..#Icon #mother #beautiful"
Tyrese Gibson: "I'm in Houston on the night we lose Whitney Houston .. Tonight's show is dedicated to her legacy"]
via: latimes
Posted by News Hump at 22:26