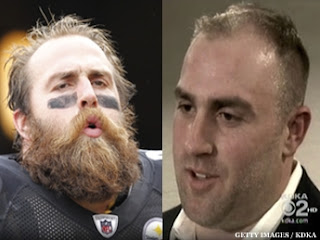 Steelers Star Shaves Off NFL's Greatest Beard, NFL player shaves off his famous beard, Steelers star Brett Keisel is barely recognizable after parting ways with his legendary look. The greatest beard in football is now just a memory. Steelers defensive star Brett Keisel parted ways with his trademark Grizzly Adams facial hair in a ceremony for charity that drew a crowd of hundreds.
How legendary was Keisel's beard? The "Brett Keisel's Beard" page has attracted almost 38,000 likes on Facebook.
KDKA reports a packed crowd witnessed celebrity barbers -- including Steelers coach Mike Tomlin and teammates James Harrison and Aaron Smith -- take turns clipping away at Keisel's facial hair.
The "Shear The Beard" fundraiser helped support cancer programs at Children's Hospital. Last year, a similar event helped raised more than $40,000, and KDKA reports this year's version is expected to top that figure.
So what's it like to go from bearded wonder to clean shaven?
"Even now, looking in the mirror, it’s strange because I’ve had the beard for so long, but it was a great night down here," Keisel told KDKA.
"Pittsburgh, of course, showed up. That’s what makes Pittsburgh special, though, is they have grasped onto this idea and really made it what it is today. If the fans didn’t respond the way they did to it, I wouldn’t do it."
Odds are high that Keisel's wife, Sarah, is pretty happy as well.
A nine-year veteran out of BYU, Keisel has 20.5 sacks and 201 tackles during a career which included a Super Bowl championship in 2009.
via: tpg
Posted by News Hump at 07:39