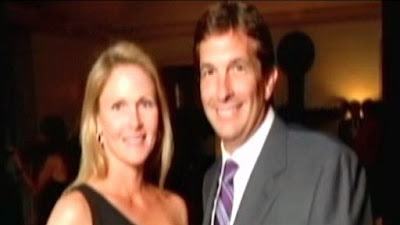 Millionaire Polo Club Founder's Children Want Adoption of His Girlfriend Tossed Out, New trouble for man who adopted girlfriend, The children of a Florida tycoon say his bizarre act was part of an elaborate scheme. Attorneys for the biological children of the Florida multi-millionaire who adopted his adult girlfriend have asked a judge to throw out what many consider to be a sham adoption enacted so the man can keep his money as he faces a $100 million lawsuit.
John Goodman, a Florida polo club magnate, adopted his longtime girlfriend, socialite Heather Hutchins, 42, as his daughter in October. On Thursday in a Florida courtroom attorneys for Goodman's children demanded a judge toss out the adoption – which they assert is a scheme by Goodman to filter millions to Hutchins.
"[Hutchins] stands to gain a minimum of $250,000 a year for as long as she lives, plus she could realize as much as $5 million a year in distributions from the trust," attorney Joseph Rebak said.
In total Hutchins could receive as much as $200 million over the next 40 years. That cash is part of a trust set up for Goodman's children -- the crown jewel of which is one of the biggest polo clubs in the world.
Goodman, 48, established the trust for his children in 1991 with $1.5 million. Within seven years, that trust had grown to more than $100 million and is currently worth "several hundred million dollars," according to his attorney.
Lawyers for his children now say Goodman is trying to keep most of his money for himself as he faces a D.U.I. manslaughter charge in the death of 23-year-old Scott Wilson, who had come home from college to Palm Beach for his sister's birthday and died in when his car was allegedly struck by Goodman's on Feb. 12, 2010.
Goodman allegedly ran a stop sign and smashed his Bentley into Wilson's Hyundai and fled the scene on foot, leaving Smith to drown in a nearby canal. On a 911 call after the accident, Goodman tells an operator that he was "down the road to a barn." It was determined that Goodman's blood alcohol level was more than twice the legal limit.
He is now being sued by Lili and William Wilson for up to $100 million for the wrongful death of their son. The Wilsons say the lawsuit motivated the unusual adoption and an alleged deal Goodman made to share the cash with Hutchings.
Attorneys representing the Wilsons said they believe that the move is Goodman's way of maintaining control of his money.
"By way of this adoption John Goodman effectively owns or has direct control of one-third of the trust assets," Wilson family attorney Scott Smith told ABCNews.com in an email. "It cannot go unrecognized that he has adopted his 42-year-old adult girlfriend as opposed to a child in need."
Court documents even allege Goodman kept the details of the adoption from his children, who reportedly never took a shine to Hutchins, the woman their father has been dating since 2009. Hutchins told police the children kept, "erasing my information out of [Goodman's] phone so he had to memorize my number."
Goodman's civil trial is set for March 27, while his criminal trial for charges of DUI manslaughter, vehicular homicide and leaving the scene of a crash is March 6. He faces up to 30 years in prison if convicted.
via: yahoo
Posted by News Hump at 07:36