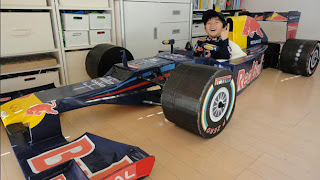 Mom builds awesome toy car for son, Mom builds 4-year-old spot-on replica of Red Bull’s 2012 Formula 1 car, A 4-year-old gets a replica of a race car like few you've seen before — hand-built by his mother. It's only mid-February, and already the world's best parent contest for 2012 appears all sewn up by a Japanese woman who spent a month building her 4-year-old son the ultimate video game station -- a cardboard replica of the 2012 Red Bull Formula 1 race car, accurate from the tail wings to the logos on the step nose.
As she describes in her blog, the woman -- a dedicated fan of Red Bull and F1 champ Sebastian Vettel -- says the project may still require tweaking, and she's not particularly happy with how the new nose came out. Working from a frame built before the RB8 was revealed, she finished the car based on photos and videos from the car's official introduction earlier this month. In addition to its detailed graphics and faithful reproduction of the aerodynamic bits, the car can fold up into thirds when not being used to speed Yoshi around on the Wii.
When asked if she could build a few more for non-family members, Formula Mom declined, simply encouraging others to build their own. Remember, all you need is some photos off the Internet, cardboard and an eye for building race cars that would make Adrian Newey envious. You've got the rest of the year to catch up, slackers.
via: yahoo
Posted by News Hump at 04:22