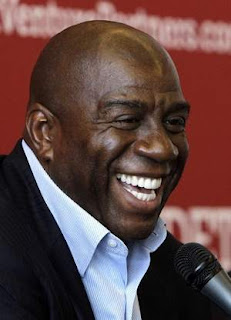 Magic Johnson to launch TV network Aspire, More than 20 years after he last played pro basketball, former Los Angeles Lakers star Magic Johnson is ready for a whole new game: running his own TV network. The Hall of Famer, who has become a successful business mogul, is preparing to launch Aspire, a 24-hour channel with a focus on what Johnson called positive, uplifting images of African-Americans. The basic cable outlet will join other channels targeting black viewers, such as BET and TV One, and will offer opportunities for blacks who have struggled to find work in mainstream Hollywood.
“This is so exciting for me, I’m pinching myself,” Johnson said in a phone interview. “This is big for myself, for the African-American community and the African-American creative community. I wanted a vehicle to show positive images and to have stories written, produced and directed by African-Americans for our community. Aspire — that’s how I’ve been leading my life.”
Film, music in mix
Aspire’s mix will include film, TV, music and comedy, with a combination of acquired projects and original programming. “There will be some performing arts and shows about faith,” Johnson said.
Johnson’s entry into the television arena comes courtesy of communications giant Comcast Corp. as part of its agreement with the FCC and Department of Justice to diversify the cable landscape. Comcast agreed last year to launch 10 new independently owned cable channels, with most backed by African-Americans and Latinos, by 2018. Johnson’s channel is scheduled to be the first.
Comcast’s obligation to support minority-owned channels came after a bruising yearlong federal review of the Philadelphia cable company’s acquisition of NBCUniversal, which includes the NBC broadcast network, NBC television stations, Universal Studios, Universal Pictures, cable channels USA, Bravo, Syfy, MSNBC and CNBC and Spanish-language broadcaster Telemundo.
During the extensive review process, which spanned all of 2010, executives were called before Congress to defend the merger. Rep. Maxine Waters, D-Calif., was particularly tenacious in her grilling of NBCUniversal and Comcast officers, questioning their commitment to hiring and advancing minorities.
read more: http://www.tennessean.com/article/20120222/BUSINESS01/302220115/Magic-Johnson-launch-TV-network-Aspire?odyssey=mod_sectionstories
Posted by News Hump at 06:21