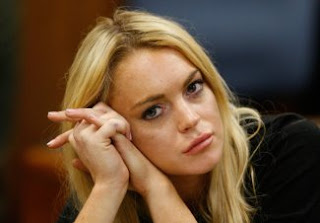 Lindsay Lohan in Talks for Liz Taylor Role, Lindsay Lohan’s probation should end next month, clearing the way for the actress to revive her acting career possibly playing Elizabeth Taylor in a made-for-TV movie. Lohan appears in court Wednesday for a judge to check her progress, but she’s gotten glowing probation reports for the last two months.
Lohan’s “on the home stretch” to completing her 480 hours of community service — most of it cleaning up at the Los Angeles County morgue — on schedule next month, her publicist Steve Honig said.
Once she’s done, Lohan will be released from the strict probation requirements that started five years ago after two drunk driving convictions. She should have finished two years ago, but it was extended after several probation violations, including missed counseling sessions, failed drug and alcohol tests and a shoplifting conviction.
via: fox8
Posted by News Hump at 06:11