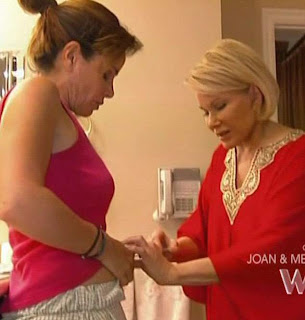 Joan Rivers Injects Daughter with fertility drugs, Joan Rivers was recently caught on camera giving fertility shots to her daughter after her daughter's boyfriend walked out mid-argument, in the most recent episode of "Melissa and Joan: Joan Knows Best." The argument led to the couple's later split, but may have been well-timed as it appears Joan isn't quite ready for more grandchildren.
The latest episode of "Joan and Melissa: Joan Knows Best" depicted Joan injecting Melissa with a fertility shot after a heated argument had occurred between Melissa and her now ex-boyfriend Jason Zimmerman.
Joan commented on the episodes on her Twitter account. "It was so hard for me to give Melissa her fertility drug injection after Jason walked out! It's a good thing I never became a junkie," Joan tweeted.
The actress and comedian also joked about the situation. "It's so frustrating! Nobody knows where Jason went. My new GPS couldn't even locate him," she said.
She also added that she wasn't interested in getting between the two.
Like us on Facebook
"I hate when people try to make me the referee- mainly because I look hideous in vertical black & white stripes," said the reality star.
The mother-daughter duo recently appeared on "Anderson Cooper," where they were asked about the things they like to hoard. While her daughter reflected on keeping a few old college sweatshirts, Joan had more interesting ideas.
"I just keep pieces of my plastic surgery," she said. "They cut it off, you think, I like that."
It may also be a good sign that the fertility shots that Melissa was taking seemed to be unsuccessful.
Joan may not be winning grandmother of the year anytime soon for her relationship with her only grandson, Cooper.
"I'm getting worried 'cause he's adorable, he's polite, he loves his mother, he's quiet," she said. "And those are the signs of a serial killer," Joan commented about the 12-year-old boy.
via: cp
Posted by News Hump at 09:44