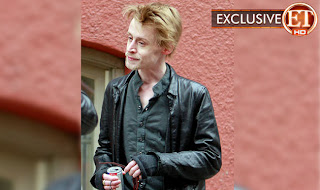 Exclusive: Macaulay Culkin's Gaunt Photo, Former 'Home Alone' star's startling look, A extremely gaunt and scruffy Macaulay Culkin turns heads on the streets of New York City. Macaulay Culkin stepped out in New York yesterday looking extremely thin and scruffy in exclusive photos obtained by ET that are likely to spark rumors about the former child star's health. Culkin also posed for a photo with a fan on the street and can be seen holding a can of Red Bull.
The 31-year-old star rose to fame playing the adorable eight-year-old child Kevin McCallister in the hugely successful Home Alone films. But his career as a child star later became overshadowed by a highly-publicized dispute with his parents, whom he sued amid allegations that they had mishandled his fortune.
Culkin is rumored to be starring in the British film Service Man -- described as an uplifting military action flick -- set for release in 2013.
Tune in to Entertainment Tonight for more of the exclusive photos.
via: yahoo
Posted by News Hump at 09:50