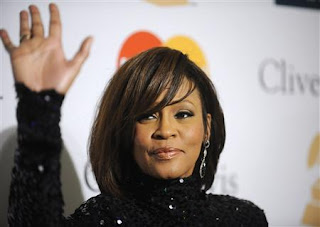 Grammys Last-minute tribute planned for Whitney Houston, Grammys Plan Last-Minute Whitney Houston Tribute with Jennifer Hudson, Chaka Khan. The moment it was announced that the legendary Whitney Houston had shockingly died on the eve of the Grammy Awards, music fans instantly wondered what sort of tribute would be planned for Sunday's ceremony--especially on such late notice. But, just like the BET Awards retooled its entire 2009 ceremony after Michael Jackson died just days earlier, the Grammys are going into similar 11th-hour overdrive this weekend.
According to The Hollywood Reporter, Recording Academy president Neil Portnow is scrambling to revamp Sunday's Grammy ceremony so that it will include a Whitney tribute featuring Jennifer Hudson. ET reports that Chaka Khan will also participate.
"The Grammys, because of the size of the production and all of the elements--with three stages and thousands of microphones and sets and costumes--it's a difficult show, like the Titanic, to move in the 11th hour," Portnow told the press at the annual pre-Grammy party hosted by Whitney mentor Clive Davis, which went on as planned despite Whitney's tragic death that afternoon. "That being said, I have the A-Team and I have a bunch of nimble people who are very smart, and we're in the process of deciding creatively what might be appropriate and what we can do tomorrow. Certainly, she'll be in our hearts."
Portnow also told reporters at the Davis gala that the last time he'd spoken to Whitney, "within the last six months or so," she had seemed fine. "She sounded great, looked great, full of life," he recalled.
via: yahoo
Posted by News Hump at 05:47