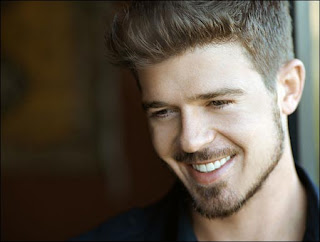 Robin Thicke arrested for marijuana possession, Robin Thicke’s reached a high Friday afternoon, and we’re not talking about his pitch. The UK’s Daily Mail reported the “Lost With You” singer and Kim Kardashian, Kris Humphries wedding reception performer was arrested in Manhattan at around 12:25 p.m. after patrol officers spotted him with a joint.
The 34-year-old father was smoking in a Cadillac Escalade by Gramercy Park and charged for marijuana possession.
According to the New York Daily News, a police source said Thicke “wasn’t driving.”
“He was sitting in the car. He was arrested and a small amount of marijuana was recovered on him.”
There was another person in the car with the Grammy winning R&B crooner, but only Thicke was arrested and charged.
Another source told the website that during the arrest, Thicke was amicable and cooperative, even when those arrest him wanted photographs and autographs.
“He was taking pictures with the cops...They were coming over to him and getting autographs.” the police source said.
Where Thicke was heading this afternoon is unknown, but a source said he gave police an address on the lower East Side.
Thicke is married to Mission Impossible actress Paula Patton and released his fifth studio album, Love After War, last December.
via: tcc
Posted by News Hump at 09:27