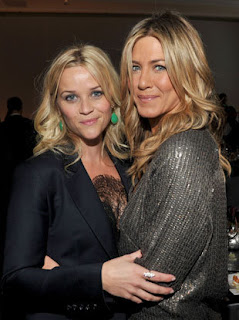 Reese Witherspoon reveals her crush on Jennifer Aniston, Reese Witherspoon: ‘I have a major girl crush on Jennifer Aniston’, The 'This Means War' actress admits Aniston is the only reason she agreed to guest star on 'Friends.' Remember the episode of "Friends" in which Rachel's sister Jill wanted to steal Ross away from her? Well, it turns out it was the other way around: Jill wanted to steal Rachel away from Ross.
Reese Witherspoon, who portrayed Jill during the show's sixth season, told Conan O'Brien on Wednesday that she took part in the series only to get closer to star Jennifer Aniston.
"I have a major girl crush on Jennifer Aniston," Witherspoon admitted." "I played her younger sister on 'Friends' -- mainly so I could meet Jennifer Aniston."
The 35-year-old "This Means War" star explained that she finds Aniston "just so lovable."
But, don't worry; this won't come as a shock to Aniston's main man, Justin Theroux. As Witherspoon told the host, she confessed her love to the actress herself about six months ago.
"I told her publicly in front of a group of a lot of people, which makes me feel safer," Witherspoon said with a laugh.
As you may recall, Witherspoon took the stage at ELLE's 18th Annual Women in Hollywood Tribute in October to introduce Aniston.
"There's not that many people actually that have this incredible combination of sex appeal and complete lovabililty," she said at the time. "You just want to get your nails done with her, and you want to make out with her at the same time . . . at least I do!"
Take a look at Witherspoon's 2000 guest spot on "Friends":