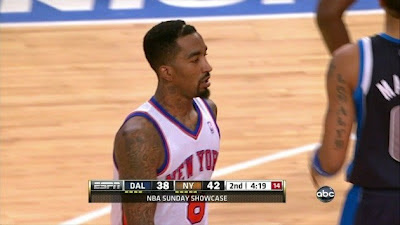 NBA player's baffling new haircut, J.R. Smith debuts for the Knicks with inexplicable hair, J.R. Smith's successful debut with the Knicks might be overshadowed by his odd look. When the New York Knicks won the services of J.R. Smith upon his return from China, they got a player equal parts talented and baffling. Smith is capable of great feats, but he also has a tendency to check out mentally and play with a level of inconsistency that borders on schizophrenic. Any team that employs him has to take the good with the bad. At this point, it's a fact of his career.
Yet even those expectations of weirdness couldn't have prepared the Knicks for how Smith looked in his season debut on Sunday against the Dallas Mavericks. As you can see above, he sported a particularly bizarre haircut, best described as a mini-fro with a single dividing line shaved across the head a few inches above the hairline.
After the jump, check out another angle, as well as a few attempts to explain exactly what's going on here.
Given Smith's reputation, it's possible that the Knicks asked him to have a lobotomy before inking his deal. Or, who knows, maybe he saw the Brazilian soccer star Ronaldo's hair from the 2002 World Cup and decided he liked it but wanted to be more conservative.
UPDATE: As pointed out by several impolite people on Twitter, the haircut is similar to a popular hip-hop style from the '80s and early '90s, most widely seen on Tupac Shukar in the movie "Juice." However, to claim that they're the same is wrong, because Tupac's haircut at least served the same purpose as a sidepart. Smith has more or less bisected his head widthwise.
The only thing we can know for sure is that Smith continues to surprise everyone after so many years. I look forward to his next game, when he'll come out wearing orange floaties as accessories.
via: yahoo
Posted by News Hump at 05:59