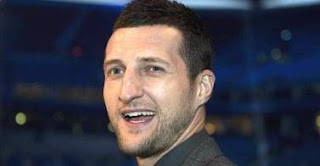 Froch admits to 'deliberately prolonging fight', Froch: 'I deliberately prolonged fights', Boxer Carl Froch has admitted he has drawn out fights on purpose so that his family could benefit financially. Former WBC Super Middleweight champion Carl Froch has admitted prolonging a title fight to enable members of his family to benefit financially.
Froch conceded he could have finished his 2005 Commonwealth title defence against Ruben Groenewald earlier than he did, but decided to keep the fight going for the purposes of bets placed by his family.
The Nottingham boxer admitted he could have finished the fight in the fourth round, but deliberately avoided doing so due to a number of bets made on it ending in the fifth.
Carl Froch said what he did was not illegal, but the British Boxing Board of Control said it would now speak to the fighter.
"I've done it more than one occasion and it was round five but that's not illegal,” he told BBC Radio Nottingham.
"I can say, 'right, I'll stop this kid in round five'. If I'm good enough to do that then fair enough.
"I don't gamble but my brothers and my friends, they did quite well off it," he said.
"I can openly say that because if I'm good enough to step on the gas in round five and force the stoppage then that's my privilege, and that's what I did in this particular fight at the Arena for the Commonwealth title defence.
"But the problem with that is I held him up in round four. He was there for the taking and I held him up, I got him with a shot, I could have ended up getting done myself in round four."
via: yahoo
Posted by News Hump at 06:05