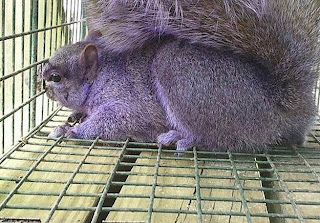 Mysterious purple squirrel baffles the Web, Purple Squirrel Stumps Web, Becomes Internet Celebrity. A Pennsylvania couple's backyard discovery sparks colorful jokes and wild theories. Under normal circumstances, if you want to see an exotic animal with brilliantly colored fur or feathers, you would have to go to the closest zoo.
Not if you're Pennsylvania residents Connie and Percy Emert. The couple found a purple squirrel in their yard. The Emerts live in Jersey Shore and have bird feeders in their yard. In an interview with Accuweather.com, Connie Emert said the squirrels are always getting into their bird feeders, and in an effort to keep the squirrels away, she and her husband will trap them and then release them into the wild away from their home.
So how does a squirrel become purple? Connie Emert says people think they dyed the squirrel, but they insist that they "found it and it was purple." There is no definite cause for this particular squirrel's color, but scientist and some locals have their theories. One zoologist suggested that the creature may have fallen into a Porta-Potty, and some worried that the squirrel's tint could prove dangerous to humans. 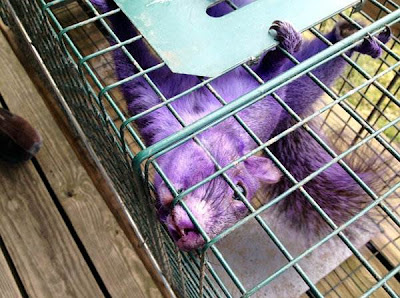 One professor says the purple tint could be from the squirrel drinking bromide-laced water from fracking in the area. Hydraulic fracking, which is common throughout Pennsylvania, is a controversial procedure of drilling for gas that environmentalists oppose because it can lead to ground water contamination from highly toxic radioactive wastewater.
However it got its color, the purple squirrel has become an Internet celebrity with its own Twitter and Facebook accounts. One person joked on its Facebook wall, "Forget stealing from the bird feeder; looks like he's been sneaking into the wine cellar!" Celebrities are loving the little guy, and even Snooki was tweeting, "I want!" But she may have a hard time finding it because the Emerts released the squirrel in Pennsylvania's Jersey Shore.
Some people on the Web can hardly believe what they are seeing. Bill O'Reilly is supporting Ellen DeGeneres? Yes, you read that correctly. On Tuesday night's episode of "The O'Reilly Factor," the political conservative defended the gay talk-show host against One Million Moms' decision to ask J.C. Penney to drop DeGeneres as the retailer's spokesperson.
Why is OMM up in arms over DeGeneres representing the company? The conservative non-profit group asserts that she is not a "true representation of the families who shop at" J.C. Penney because she is gay. O'Reilly said he does not think it's "the spirit of America" for the retailer to fire DeGeneres just because OMM thinks that being gay is against its moral code of family values.
O'Reilly compared OMM's opposition to DeGeneres to the McCarthy-era blacklisting. O'Reilly's solution, One Million Moms should just not shop there. Even though the group has the right to oppose J.C. Penney's decision to hire DeGeneres as its spokesperson, O'Reilly says, it is wrong for a conservative group in this country to ask a private company to fire an American citizen based upon her lifestyle.
DeGeneres publicly thanked O'Reilly for his support on her talk show, but took it a step further by tweeting her appreciation for his support and saying that O'Reilly can "use [my] employee discount any time." People on Twitter are calling the situation "surreal," and one person even said that O'Reilly standing up for DeGeneres is the beginning of "the Mayan apocalypse."
via: yahoo
Posted by News Hump at 12:07