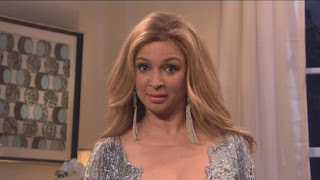 Maya Rudolph's Hysterical Beyoncé Impression, Maya Rudolph proved again this Saturday night that she is one of the funniest people in entertainment, and simultaneously reconfirmed how much we dearly miss her as a regular on Saturday Night Live. Rudolph hosted the show on which she was a regular cast member for seven years this weekend for a very entertaining and hilarious performance.
She opened the show with a hysterical musical number about the men from SNL that she "got funky with," which set the tone for the show.
Amy Poehler then teamed up with Rudolph for a reunion of "Bronx Beat with Betty & Jodi" where the gossipy duo flirts with Justin Timberlake and Andy Samberg, who are playing crewmen of the show.
Included below is one of Rudolph's hilarious SNL skits of a parody of celebrities coming to visit Beyoncé and Jay-Z's baby, Blue Ivy, including some unlikely guests like Justin Timberlake playing Bon Iver and Kristen Wiig playing a shocked Taylor Swift.
Enjoy the wildly hilarious Maya Rudolph.