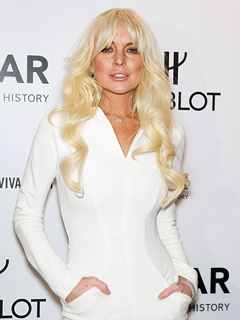 Lindsay Lohan to Host Saturday Night Live, She may not be landing big screen roles at the moment, but Lindsay Lohan has just nabbed a major gig. On March 3, the 25-year-old will make her return to Saturday Night Live where she will host for the evening. Jack White will be the musical guest.
This will be Lohan's fourth time on the NBC late night show -- her first since 2006. The SNL producers should have a ton of material to work with, beings that Lohan has been through a lot since she last hit the stage in NYC's Rockefeller Center.
In November, Lohan checked in and out of jail (her fifth sentence overall) in under five hours due to crowding. Currently, she is serving the terms of her probation ordered to her by Los Angeles judge Stephanie Sautner, who told the star last month, "keep doing what you're doing. You appear to be doing very well."
When Lohan appears in court this Wednesday, she is expected to have completed an additional 15 days of community service at the morgue and five more psychotherapy sessions. If Lohan continues to fulfill her court-ordered obligations, her probation will end March 29.
via: um
Posted by News Hump at 10:17