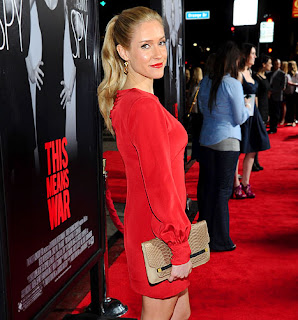 Kristin Cavallari's Tiny Baby Bump, She may be in the early stages of her pregnancy, but Kristin Cavallari already has that mommy-to-be glow. The star, 25, was all smiles at the This Means War premiere in Los Angeles Wednesday night. Dressed in a red-hot Maria Lucia Hohan dress teamed with Isharya earrings and nude pumps, she took to her Twitter account to gush over her first public appearance since announcing last month that she and fiance Jay Cutler were expecting.
"Here is a pic from last nights premiere and you can see a little baby bump," the former Laguna Beach star tweeted.
For the on-again fiances, who were in the middle of their wedding plans when they received news that Cavallari was pregnant with their first child, plans for any nuptials are being put on hold.
"I'm not even looking for a wedding dress right now," she told Celebuzz last week. "I'm pregnant! I'm not going to go try on wedding dresses."
via: um
Posted by News Hump at 22:24