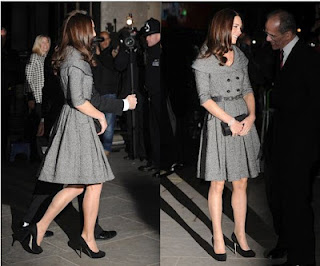 Kate stuns at first solo royal appearance, Kate Middleton Shines in First Solo Public Engagement, Kate Middleton Wearing A Grey Jesire Coat Dress At The National Portrait Gallery, The red carpet is out and tonight Grazia Daily is hob-nobbing with Royalty (and otherwise.) Yep, we’re at the National Portrait Gallery to greet none other than the Duchess of Cambridge, Kate Middleton. She’s here to carry out her first official duty, on her own. So we thought we’d pop down to support her – and we’re not the only ones. Kate’s fans are Out. In. Force.
For the occasion, the Duchess is wearing a grey coat dress with a flared skirtan and oversized collar draped over her shoulders (well, it is cold), nipped in at the waist with a belt. She's accessorised her look with a black clutch, a dainty silver necklace and matching diamond bracelet (well, she is a Duchess), plus black court shoes - with bare legs (brrr!). Her brunette tresses are worn in their signature style - loose and glossy.
The Duchess of Cambridge is visiting the London gallery in Trafalgar Square to view the Lucian Freud portrait exhibition. Late last year, the Princess became patron of the gallery – not surprising, since she has a degree in history of art from St Andrews, where she famously met her Prince.
Kate, who is said to greatly admire the artist, will be treated to a private viewing of Freud’s work, featuring his most important portraits from the 1940’s right through to the one he was painting shortly before he died in 2011.
And, Grazia Daily has heard on the grape-vine that soon enough, Kate could soon be appearing at the gallery herself. No, we’re not repeating ourselves – though she broke protocol by refusing to sit for a painting following her wedding in April, rumours suggest that Kate is in talks to sit for her first official portrait.
Speaking to the Evening Standard, gallery director Sandy Nairne said: 'It's very early days, but we've started a discussion. It will be at least the summer before there's anything concrete and we can start to look for an artist.
'It's very exciting. She came to see us last September when she was deciding which organisations to support. She was fizzing with intelligent questions.'
via: yahoo
Posted by News Hump at 09:17