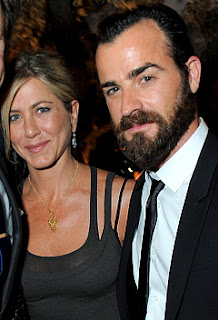 Jennifer Aniston: Justin Theroux Looks "Like a Serial Killer", When Jennifer Aniston first met Justin Theroux on the set of Tropic Thunder in 2007, he didn't exactly leave the best impression. "I met Justin about five years ago and I thought he was very sweet and he was always very nice," Aniston, 43, tells Pop Sugar. "But I remember thinking he was very dark. At first you think he could be like a serial killer, but he is actually the nicest person in the world."
Aniston and Theroux, 40, fell in love while shooting Wanderlust in the fall of 2010, but the actress "didn't recognize him at the camera test." (Theroux's character has a bushy beard and long hair in the film; he's since shaved and cut his hair.)
"That's what's so great about him," Aniston raves of Theroux. "He can do different looks and he just disappears."
Wanderlust, which also stars Paul Rudd and Malin Akerman, hits theaters February 24.
via: um
Posted by News Hump at 12:33