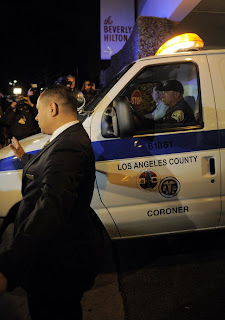 Houston's body taken to morgue; autopsy planned, A coroner's official says Whitney Houston's body has been transported from the Beverly Hills hotel where the singer died and is awaiting an autopsy. Capt. Brian Elias of the Los Angeles County coroner's office says the examination has not been scheduled and that investigators are awaiting reports before an autopsy can be conducted.
He says he cannot release any information about how Houston's body was found at the Beverly Hills Hilton.
The 48-year-old singer died Saturday on the eve of the Grammy Awards. She had been expected to attend a pre-Grammy gala but was found dead hours before the event. Paramedics attempted to revive Houston, but were unsuccessful.
Her body remained at the hotel for several hours before being taken to the morgue.
via: yahoo
Posted by News Hump at 04:19