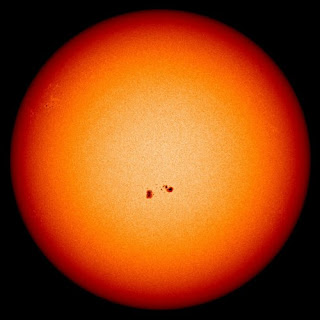 Gunlike sunspot points at Earth, Sun points a loaded gun at us, As solar activity builds toward an expected peak in 2013, a double-barreled sunspot has been doubling in size over the past couple of days and now has the potential to shoot significant eruptions in our direction.
It's not certain that active region 1416 will erupt with coronal mass ejections as violent as the blasts that were thrown off by the sun late last month. But it has developed a mixed "beta-gamma" magnetic field that packs enough energy to throw off medium-scale solar flares, SpaceWeather.com reports.
"Any such eruptions this weekend would be Earth-directed as the sunspot turns to face our planet," SpaceWeather's Tony Phillips wrote.
Medium-size M-class flares are generally associated with the kinds of solar storms that produce enhanced auroral lights, but not huge inconveniences on Earth. It's the X-class flares you really have to watch out for: That level of solar storming could affect radio communications as well as satellites and electrical grids if the operators of those systems aren't careful.
NASA and the National Oceanic and Atmospheric Administration have a wide array of space assets monitoring the sun, and for now all's quiet on the solar front. NOAA's Space Weather Prediction Center reported some problems tracking the Advanced Composition Explorer, a satellite that plays a key role in tracking solar storms, but those problems are expected to go away as ACE's orientation with respect to the sun improves.

The prediction center's Facebook page reports that on Friday, the sun threw off a slow-moving coronal mass ejection, or CME — in the shape of a heart, no less. "A preliminary model run predicts this CME will arrive, appropriately enough, on Valentine's Day," NOAA reports. So if you're out with your Valentine that night, particularly in Scandinavia or Canada, watch the skies. Even if the earth doesn't move, the aurora might glow.
Meanwhile, the sunspot region that caused all the auroral fireworks last month, known as AR1402, has moved around the far side of the sun. Solar scientists will be interested to see how that region has changed when it comes back into view. We're still a year out from the anticipated peak in the sun's 11-year activity cycle, so there'll be lots of sun-watching ahead. The best ways to keep track on a daily basis is to check in with NOAA's space weather center and SpaceWeather.com.
via: msn
Posted by News Hump at 22:15