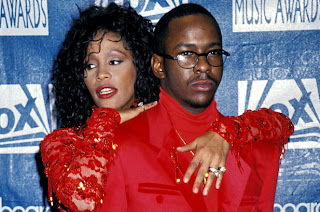 Bobby Brown Grieves on Stage, Grieving Bobby Brown breaks down, Bobby Brown Grieves On Stage Over Whitney Houston’s Death, Whitney Houston's ex-husband pauses during a New Edition concert to recognize her. Bobby Brown, ex-husband of Whitney Houston, grieved publicly over Houston's death during a concert in Mississippi Saturday, according to reports.
Houston was found dead in her hotel room at the Beverly Hilton Hotel Saturday afternoon.
Brown reportedly took the stage with New Edition at Landers Center shortly after receiving the news. He professed his love for Houston when he addressed the crowd. "First of all, I want to tell you that I love you all," Brown said, according to the Associated Press. "Second, I would like to say, 'I love you Whitney.' The hardest thing for me to do is to come on this stage tonight."
According to Us Magazine, Brown did not come out on stage until the second song, "Hit Me Off," which he performed enthusiastically.
When he sang his solo hit "Tenderoni," he began crying and asked the audience to help him sing the song, a concertgoer said.
Brown and Houston, were married from 1992 to 2007, and have one daughter together, Bobbi Kristina, 18.
via: yahoo
Posted by News Hump at 09:07