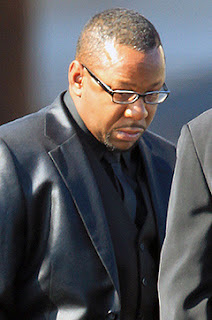 Bobby Brown Explains Why He Left Whitney Houston's Funeral, Bobby Brown leaves funeral after dispute, Whitney Houston's ex-husband says security disrespected his family at the service. Whitney Houston's funeral packed the inside of Newark's New Hope Baptist Church Saturday. But one notable person who was absent from the crowd was her ex-husband Bobby Brown.
A witness tells Us Weekly that Brown "was allowed to go in, pay his respects and then he had to leave. He was red-eyed going up to the casket and then left. He was there for 15 minutes."
Addressing the speculation that he was thrown out, turned away and rumors that he didn't show at all, Brown, who's schedule to perform at a concert Saturday, has released an official statement, explaining the situation in full.
"My children and I were invited to the funeral of my ex-wife Whitney Houston. We were seated by security and then subsequently asked to move on three separate occasions. I fail to understand why security treated my family this way and continue to ask us and no one else to move. Security then prevented me from attempting to see my daughter Bobbi Kristina. In light of the events, I gave a kiss to the casket of my ex-wife and departed as I refused to create a scene. My children are completely distraught over the events. This was a day to honor Whitney. I doubt Whitney would have wanted this to occur. I will continue to pay my respects to my ex-wife the best way I know how."
Earlier this week, a source told Us that there is still underlying tension between Houston's relatives and Brown, who married Houston in 1992. Their divorce was finalized in 2007.
"There are family members who felt Bobby drove Whitney into drugs," one source explained. "But now Bobby is clean and Whitney has unfortunately passed. So there's resentment."
via: yahoo
Posted by News Hump at 21:33