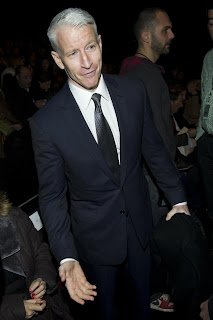 Anderson Cooper struggling to survive in daytime, To celebrate the 100th episode of Anderson Cooper's daytime talk show in an hour that airs Monday, a giant cup of frozen hot chocolate topped with whipped cream was wheeled onto the set after its star interviewed a svelte Janet Jackson. Something sweet was undoubtedly welcomed. It's been a tough stretch for "Anderson," illustrating how difficult it can be to launch a successful television series from scratch.
In six months, the show has weathered a scandal involving a scheduled guest's serious injury, seen three top executives leave and a new one join midstream, and experimented with different formats to see what suits Cooper best.
His ratings rank him above Wendy Williams and Steve Wilkos in the talk-show pecking order, but behind rivals Dr. Phil, Dr. Oz, Jerry Springer, Maury Povich, Ellen DeGeneres and Kelly Ripa. If not for a distribution deal that gives its syndicator, Telepictures Productions, what it considers more desirable network slots in cities like New York, Houston and Orlando, Fla., next season, some in the industry question whether "Anderson" would have survived.
Still, Cooper and his staff are fighting and believe they have turned a corner.
"Any show takes time organically to figure out what it is," Cooper said. "I think we've made a lot of progress in doing that and I'm really pleased in where the show is and where the show is headed."
Subject matter varies widely on "Anderson" in much the same way as it did on "The Oprah Winfrey Show." Interviews with Jackson, Madonna and Angelina Jolie dominated recent hours. Topical segments ranged from extreme child discipline and the Penn State child sex scandal to advice on removing clutter and healthy cooking.
The show usually stuck to one topic per hour when it first began, but since the arrival of new executive producer Terence Noonan, usually features two or three shorter segments.
"They're facing the same issue that everyone does, which is trying to figure out what they should be doing," said Bill Carroll, an expert in the syndication market for Katz Media. "Finding their voice is the toughest thing for all of these shows. I think they're still finding it."
Less than a month into operation, "Anderson" had to deal with the fallout from a skateboarding accident where a boy went into a coma after being asked by show producers to provide footage of himself for an episode on the science of the teenage mind. The incident raised questions about whether the boy was encouraged by the show to take risks.
The boy survived and is recovering. The story itself did not linger, in part because the boy's family sought privacy. Cooper and Telepictures would not discuss the incident and its aftermath, citing that privacy request.
The original "Anderson" executive producers were Jim Murphy, a longtime broadcast newsman most recently executive producer of ABC's "Good Morning America," and Lisa Morin, who worked at Winfrey's Harpo Productions. Both were gone by the first of the year. In Murphy's case, his news background probably meant for an uncomfortable fit with the daytime world, either for him or the show, maybe both.
Also exiting Telepictures at the time was Cathy Chermol, a veteran producer who had been assigned to help with the "Anderson" startup.
The New York Post reported that Chermol and Cooper clashed over her instructions to the audience not to hold back emotions during a show on the Penn State scandal. Cooper said he would not discuss personnel issues and Chermol could not immediately be reached for comment.
"People can express themselves, but they don't need to be reminded of that or encouraged to do that by anyone on the staff," he said. "If that was true, it's not something that would be acceptable to me."
Cooper said the behind-the-scenes turnover was "completely normal" for a new show.
"As the show evolves and it becomes more topical and as it changes, different people have different strengths," he said. "To me, it's not surprising. It's pretty expected in this business."
The new producer, Noonan, is a daytime veteran familiar with the needs of an audience that is nearly three-quarters women. He worked on "Dr. Oz" and was familiar to Telepictures through his work on the company's talk show with Rosie O'Donnell.
Telepictures President Hilary Estey McLoughlin has also played an active role in pushing for change. Too many of the early shows were recorded well in advance and lacked sharp hooks, she said. Earlier hours included "Anderson's Costco Adventure" and shows on psychics and pets.
"We definitely want to talk about issues that are capturing everyone's attention," McLoughlin said. "What's great about Anderson is he can elevate the material. It's smart, it's informational and at the same time he has the personality to make it entertaining. He has a great sense of humor and is able to bring a tremendous amount of range to the shows."
Noonan talks about "layering" the shows and trying different ideas. The Janet Jackson hour was partly filled by Cooper's interview, for instance. But they also brought on a trio that danced to Jackson's music so the star could surprise them, and offered diet tips from Jackson's chef and exercises from her personal trainer.
Cooper gets up from his stage chair frequently to interact with the audience, another new wrinkle.
So far, Cooper has been able to keep up the pace with his different jobs. His studio at Manhattan's Columbus Circle overlooks a breathtaking view of midtown Manhattan and is only steps away from the New York offices of CNN, where he anchors a primetime news hour.
While not great, the "Anderson" ratings are acceptable given the show's time slots, Carroll said. Next season, Katie Couric becomes part of the competition, and it will be time to step it up.
via: yahoo
Posted by News Hump at 22:59