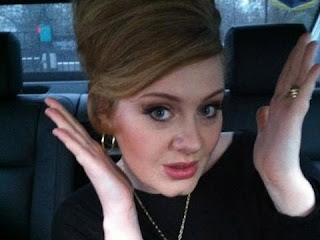 Adele Responds to 'Fat' Comments, Adele responds to cruel 'fat' remark, The Grammy front-runner offers a refreshing take on a designer's criticism about her figure. For many women, the ultimate insult is being called overweight. However, Grammy-nominated sensation Adele is not one of them--in fact, she says she's just fine with her shape and size.
In response to a comment by fashion icon Karl Lagerfeld, who caused waves by outright calling the 23-year-old "fat" in an interview with Paris newspaper Metro this week, Adele had this to say: "I've never wanted to look like models on the cover of magazines. I represent the majority of women, and I'm very proud of that." The quote appears in the February 20 issue of People, which hits newsstands on Friday.
Lagerfeld's critique of Adele (which also included praise for her "beautiful face" and "divine voice") received immediate backlash from the singer's fans, as well as many women who just plain thought the comment unnecessary. Calls to "boycott Chanel"--the fashion house Lagerfeld heads up--popped up on Twitter, and even sparked a dedicated Facebook page over the past two days.
Lagerfeld has since apologized for his comment. On Wednesday, he told Metro that he is Adele's "biggest admirer" and that his quote was taken out of context.
"I lost over 30 kilos over 10 years ago and have kept it off," he said. "I know how it feels when the press is mean to you in regards to your appearance."
Regardless, Adele has far weightier matters on her plate than, well, her weight in the coming days. On Sunday, she'll be appearing at the 2012 Grammy Awards in Los Angeles, where she's up for six awards--including Album of the Year--and will be performing for the first time since undergoing throat surgery in November.
via: yahoo
Posted by News Hump at 11:53