Adele Apologizes For Flipping The Bird During Brit Awards

Adele Apologizes For Flipping The Bird During Brit Awards 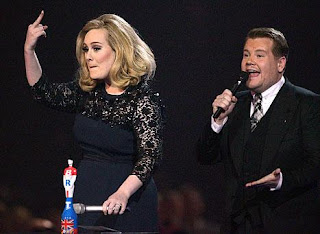 Adele Apologizes For Flipping The Bird During Brit Awards, Adele continued her musical award show reign on Tuesday at the Brit Awards, but not without a middle finger mishap. Following in M.I.A.'s Super Bowl footsteps, the 23-year-old singer - who took home best British female and best British album - became frustrated when her acceptance speech for the night's top award was cut short.
"Nothing makes me prouder than coming home with six Grammys and then coming to the Brits and winning album of the year. I'm so proud to be British and to be flying our flag," she said during the speech as host James Corden was forced to interrupt her in order for Blur to take the stage.
"Can I just say, then, goodbye and I'll see you next time round," Adele added before giving the finger, which was briefly seen live on Britain's ITV1.
Later backstage, Adele apologized for the incident, the BBC reported.
"I flung the middle finger. That was for the suits at the Brit Awards, not my fans. I'm sorry if I offended anyone but the suits offended me," she told reporters. "I was about to thank the British public for all their support but they cut me off. So thank you very much for all your support. It's amazing."
Following the awards show, ITV issued a statement, saying, "The Brits is a live event. Unfortunately the program was over-running and we had to move on. We would like to apologize to Adele for the interruption."
A rep for the Brit Awards also spoke out about the incident.
"We regret this happened and we send our deepest apologies to Adele that her big moment was cut short," the rep said in a statement. "We don't want this to undermine her incredible achievement in winning our night's biggest award. It tops off what's been an incredible year for her."
via: yahoo
Posted by News Hump at 08:56