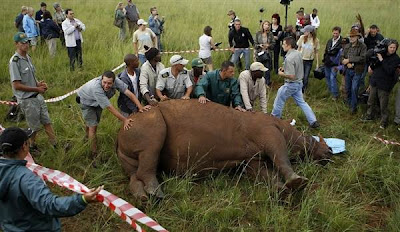 Rhino dies in anti-poaching demo, Rhino dies in anti-poaching demo by conservationists, A conservation group demonstrating an anti-poaching method for reporters in South Africa accidentally killed the rhinoceros they were using in the demonstration. The rhino, nicknamed Spencer, went into convulsions and died after he was shot with a tranquilizer dart in front of a crush of TV cameras and photographers who had been invited to document an operation to insert a poison capsule into his horn.
The private reserve near the capital, Pretoria, calls in veterinarians to sedate rhinos so their horns can be treated with a dye and an insecticide, and tracking and identification devices can be inserted.
A male in his mid to late 20s, fairly old for such an animal, could not be revived after being sedated Thursday, said Rhino Rescue Project spokeswoman Lorinda Hern.
"The rhino had an unfortunate reaction to the anesthesia," she said. "Every time you dart a rhino, you take a risk that the rhino might not wake up and unfortunately today was one of those days."
Conservation groups insert poison capsules into the horns of rhinos, which release poison into the horn when it is removed from the animal and are meant to render the horn value-less for hunters seeking to sell it on for use in traditional medicine.
Both anti-poaching procedures require the rhinos to be sedated.

A decade ago South Africa, with more than 20,000 rhinos, was losing about 15 animals a year to poachers. But poaching has increased dramatically since about 2007 as the spread of wealth in places like Vietnam and Thailand has enabled more people to buy rhino horn, which is believed to have magical or medicinal properties in some cultures.


A record 448 rhinos were killed by poachers last year in South Africa, home to the greatest number of the animals. The number was up sharply up from 122 in 2009 and 333 in 2010, according to a report by AllAfrica.com. A majority were killed in the Kruger National Park, which borders on Mozambique, the report said.

"It's sad for us; it's the loss of another animal," Hern said, referring to the rhino's death. "It's a death that I still chalk up to poaching."