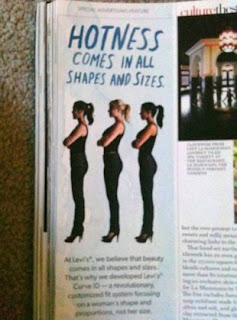 Levi's 'curve' ad stirs controversy, Jeans Ad Sparks Controversy. Do Levis Models Come in Any Other Sizes?, The denim maker has come under fire for the size of the women in its campaign. When it comes to selling clothes, size matters. A campaign for Levis Curve ID Jeans was banking on it, until it backfired.

The line of customized shape-fitting denims boasts in a print ad, "hotness comes in all shapes and sizes." But underneath that message of empowerment, are three models with very similar, slender body types. Aside from slight differences in backside protrusions, none of the models reflect the size 14 shape of the average American woman.
Copyranter, an advertising watchdog blog that posted the magazine ad Wednesday, called it an insult to women size six and over.
"The company doesn't seem to understand what 'different' means," added Jezebel's Anna North. "See, 'hotness comes in all shapes and sizes,' as long as those shapes are minute variations on the same thin, ponytailed woman."
In a call to Levis, a spokesperson told Shine that particular ad is actually from last year. Their latest campaign takes into account the heaping dose of criticism from bloggers since the first ads launched in 2010. ("If you put the words 'Bold Curve' next to a woman, I expect her to have, um, bold curves and preferably legs that don't look like toothpicks," activist Shelby Knox wrote of one of the first Curve ID ads.)
In fact the most recent ads for Curve ID, launched last week, plays down the word "curve" and play up the toothpicks. More street art than self-help, the look of the new campaign for the 'Ankle Skinny' Curve ID jeans, buries the curves behind six long slim legs. It's hard to tell any difference at all between the three body types presented because of the way they're posing, but it's safe to say nobody's a size 14.
"By no means is the advertising representative of all women's body types across the globe," Levis rep Ibby Clifford tells Shine, adding that a more diverse gallery of "real women" exists on their Facebook page.
Levis' Curve ID brand concept attempts to eliminate the physical torment as well as the psychological baggage of buying jeans. That's probably why the campaign has historically taken so much heat, compared to every other jeans ad with a skinny model. While the line features a wide range of sizes, the focus is on the curvature of four different body types: Slight, Demi, Bold and the more recent, Supreme. The Starbucks-inspired naming convention is designed to take the stigma out of jeans sizes and celebrate the curvier figure. But ever since the line launched in 2010, its ad campaigns have struggled to portray real body types in print.
It's not the first to apparel brand to stumble while promoting equal opportunity designs. American Apparel incited critics last year when it announced a plus size modeling contest to promote their new XL line.
While advertisers struggle with the demand for larger sizes, merchandisers are embracing it. The Limited launched an entire online shopping site last year for, Eloquii, their line for women sizes 14w and over. In the UK, size 12 mannequins are storming department stores. Displaysense, one of the biggest suppliers for clothing chains, has seen a 16 percent increase in requests for curvier mannequins.
In the past year, Levis has had so much success with their Curve ID line, they've expanded the range of cuts and styles, notably adding a larger shape option called Supreme, "designed to solve the fit frustrations of the curviest women."
Despite the wider variety of sizes in stores, one size still fits magazines-and it's too small for a growing number of critics. Still, even those critical of Levis' Curve ID promotions, seem to like the actual jeans. "They've made some nicely fitting jeans, albeit jeans that still fit squarely into a body-oppressive paradigm," confesses My Body Image's Taylor Owen. "I'll admit, I bought two pairs. "
via: yahoo
Posted by News Hump at 21:28