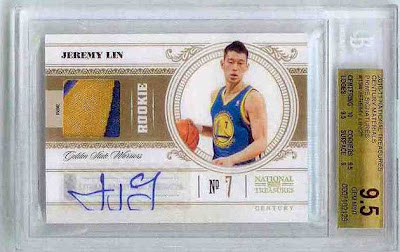 Jeremy Lin rookie card fetches huge sum, A signed Jeremy Lin rookie card goes for $21,580 on eBay, The NBA sensation doesn't have any endorsement deals yet, but others are cashing in on him. Just a few hours after wondering if the fascination with New York Knicks guard Jeremy Lin was waning, now we've proof that people are still absolutely nuts when it comes to the point guard that wasn't even in the team's rotation three weeks ago.
Though Lin doesn't even have a significant endorsement deal to his name (though we've been assured that Nike is on the ready with a pair of Lin-branded shoes), a signed National Treasures rookie trading card from Lin's one season with the Golden State Warriors in 2010-11 just sold on eBay for $21,580. The 36th bid was the winner.
That's right. You could either buy a brand new Volkswagen Jetta with all sorts of lovely features directly off the lot and without haggling over the price, or you could have a signed rookie card (with a tiny piece of Lin's old Warriors jersey included) for the same price. As of the end of the bidding, by the way, Jeremy Lin has played a total of 756 NBA minutes thus far in his career. Minnesota Timberwolves All-Star Kevin Love, for comparison's sake, has played about as many minutes since Jan. 14 of this year.
And what might be the strangest aspect of this is not only the fact that people are still paying huge sums for trading cards, or that there are still basketball cards, but that this wasn't some collector that found what was once an unknown card amongst a stack of throwaways. In fact, the previous owner of the card (assuming this nutty transaction goes through) actually paid a thousand dollars for the card a couple of weeks ago.
From the International Business Times:
That card is owned by Yair Rozmaryn, a card collector in Manhattan, who bought a Lin rookie card for $1,000 from another collector on eBay two weeks ago. At that point, Lin-sanity was in its infancy: Lin had his memorable 25 point performance off the bench against the New Jersey Nets at home. Two days later, he made his first start and put up 28 points against the Utah Jazz, again playing at Madison Square Garden.
"I saw a lot of potential in him," said Rozmaryn to ESPN on Wednesday.
Pretty fair investment, based on that potential. Kind of unfortunate that Golden State saw fit to dump Lin's $762,000 salary on the potential that the Los Angeles Clippers would pass on matching their team's contract offer to DeAndre Jordan.
via: yahoo
Posted by News Hump at 13:25