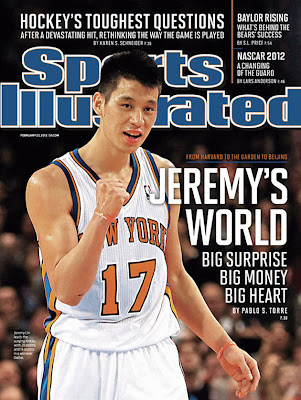 Jeremy Lin's impressive new honor, Jeremy Lin scores his second straight Sports Illustrated cover, joining some lofty company, The hoops phenom joins Michael Jordan and one other NBA player with his latest accomplishment. You can point to New York's cupcake schedule in the days following Jeremy Lin's ascension into the Knicks rotation on Feb. 4. You can point to the minutes he plays in New York's frantic pace, as Jason Terry did on Sunday, and all the possessions he gets to dominate.
That's what Player Efficiency Rating -- which adjusts for pace, minutes, and takes into consideration all those turnovers and all those possessions used up -- is for. And, 2 1/2 weeks into his star turn, Jeremy Lin has gone from D-League refugee to eighth in the NBA in PER. And, as the biggest story in sports at the moment, he's more than deserved his two straight Sports Illustrated covers. Here's this week's:
Bust out the excuses. He's playing in the country's biggest market. Because of his Asian-American heritage, he's reaching out to a basketball-mad community that hasn't had an American-born star to call its own. It's February, the brackets have yet to be filled, pitchers and catchers just reported, and the football season ended a few weeks ago -- the slowest time of the sports year.
Doesn't matter. Lin has earned this dual distinction. One that, as BuzzFeed's Mike Hayes pointed out, has only been shared by Dirk Nowitzki and Michael Jordan amongst NBA idols.
The furor will die down. The stats will mellow out. The Knicks will likely battle it out in the lower reaches of the Eastern Conference playoff bracket, and the puns (hopefully) will go away forever. Things are bound to come back to earth, if only slightly.
via: yahoo
Posted by News Hump at 13:28