Dog bites anchor in the face on live TV

Dog bites anchor in the face on live TV 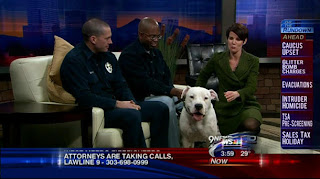 Dog bites anchor in the face on live TV, Rescued dog bites NBC anchor in the face during feel-good segment gone wrong, A local station rushes to pull disturbing footage from the Web after a feel-good segment goes wrong. It was supposed to be one of those feel-good segments on a local television newscast: A rescued dog. A grateful owner. The hero firefighter who pulled the pulled the dog from the ice. But that's not how it turned out.
The dog, an Argentine mastiff named Gladiator Maximus, attacked Kyle Dyer, anchorwoman at NBC's KUSA Denver affiliate, during a live, in-studio segment on Wednesday that was meant to celebrate the dog's rescue from an icy lake the day before.
Dyer was shown petting the mastiff during the segment, then kneeling on the floor to get closer, when the 85-pound pooch bit her in the face. Paramedics and animal control were called to the studio. Dyer was rushed to a Denver hospital where she had reconstructive surgery overnight. The 3-year-old dog was taken to a Denver animal shelter where it is being "quarantined."
Video of the attack, as you might imagine, has gone viral, but KUSA has been issuing take-down notices, trying to get the clip off the Internet.
Patti Dennis, KUSA vice president of news, said Dyer's surgery was successful, and that Dyer is expected back to work in a few weeks. "The surgeon was pleased with the outcome," Dennis said. "Kyle says she wants everyone to know she is OK and is concerned about the viewers who were watching the incident live on TV."
"Several people interacted with the dog [prior to the segment] and everything seemed fine," Dennis said. "Then at the last moment, the dog had behavior that nobody predicted or understood. Clearly we learned something."
Dyer is known for a weekly segment--"Kyle's Kritters"--that showcases animals from the Denver Zoo.
Michael Robinson, Max's owner, has been cited by Denver Animal Control for a "leash-law"" violation ("because the owner did not have control of the dog at all times"), for allowing a dog to bite and for not having the dog properly vaccinated.
But an animal expert told NBC that Dyer was really at fault.
"Basically, she did everything wrong," Ron Berman, a canine behavior specialist, said. "She went up to a dog she didn't know--who didn't know her--and she either tried to kiss him or hug him or put her face too close to his face. He felt threatened and bit her."
Max is expected to be released to Robinson after a 10-day evaluation. Robinson is due in court April 4.
"The dog bite accident that happened today was unfortunate and certainly not expected based on what we knew about the dog and his owner," Dennis said in a separate statement. "Our goal was to unite the owner with the rescuer for a nice segment. We are all thinking of Kyle and her recovery. We love Kyle and what she and her family do for this community. We also love animals and will continue to do all we can to use 9NEWS to improve animal welfare in Colorado."
Dennis said the station is now reviewing its guidelines concerning animals in the studio.
via: yahoo
Posted by News Hump at 08:33