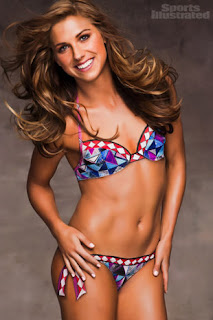 Alex Morgan poses in bodypaint for SI Swimsuit, Soccer star in body paint for swimsuit issue, Alex Morgan is one of three female athletes who will don the look for Sports Illustrated. Following U.S. goalkeeper Hope Solo's naked lawn watering in ESPN The Magazine's body issue, Alex Morgan -- Hope's U.S national teammate and fellow recipient of an impressive number of Facebook marriage proposals during last summer's Women's World Cup -- will be one of three female athletes to pose in bodypaint for the upcoming Sports Illustrated swimsuit issue.
The issue won't be released until Tuesday, February 14, but SI.com's Hot Clicks revealed the first picture of Morgan in her bodypaint bikini (right) and they also asked her a few questions about the shoot, including this bit of inanity:
SI.com: What was more intimidating: posing in bodypaint or taking on Japan in the World Cup finals?
Morgan: I have been playing soccer my entire life. I know how to stay calm and not get too nervous for games. That's why I would have to say posing in bodypaint was a little more intimidating. It was a completely new experience and definitely took some getting used to before I felt comfortable in bodypaint. I had to look in the mirror every five minutes to make sure I actually had a swimsuit on.
By scoring four goals in the U.S. women's Olympic qualifying run, Morgan helped ensure the team's place at the London games this summer. And, who knows, maybe the chance to win a gold medal will prove even more intimidating than bodypaint.
via: yahoo
Posted by News Hump at 21:44