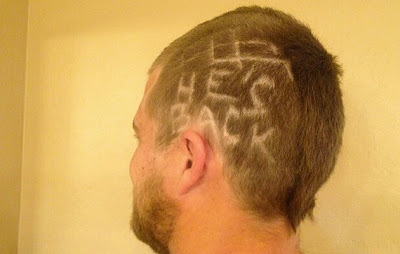 QB shaves funny message into his hair, Bills QB Ryan Fitzpatrick gets hair-happy about Stevie Johnson’s new deal, Buffalo's Ryan Fitzpatrick finds a unique way to celebrate his star receiver's new deal with the team. You'd expect Buffalo Bills quarterback Ryan Fitzpatrick to be happy about the new five-year, $36.25 million deal given to receiver Stevie Johnson -- after all, Johnson is the Bills' best receiver, and the Bills led the league in four- and five-wide sets in 2011, per Football Outsiders' game-charting metrics.
However, this might be taking that glee a bit too far. Via the greatness of Twitter, we bring you the haircut that shows just how much Johnson means to Fitzpatrick:
A seventh-round pick in 2008, Johnson has posted two straight seasons of more than 1,000 receiving yards. Johnson's an outstanding receiver, but if Fitzpatrick is doing this for his guy, what should Kevin Kolb be doing for Larry Fitzgerald, or Matt Schaub for Andre Johnson? The mind positively reels.
via: yahoo
Posted by News Hump at 21:43