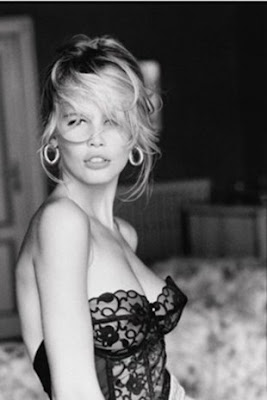 Now 41-years-old, the seemingly ageless supermodel is the face of Guess once again. And, judging by the pictures taken by Ellen von Unwerth -- who has been the photographer on all six of Schiffer's previous Guess campaigns -- she doesn't look like time has touched her.
"Guess will always have a soft spot in my heart, and I'm excited that 23 years later we can still work together so successfully," Schiffer told Women's Wear Daily
"[Schiffer] was a turning point of Guess, she was a turning point of Ellen's career, Guess was a turning point of a life for Claudia," Guess CEO Paul Marciano told Women's Wear Daily.
The blast-from-the-past ad campaign showcases the brand's new 30th Anniversary Collection, which was inspired by Schiffer and other former Guess girls.
The 15-piece collection will include wide-neck T-shirts with images of Guess models Line Gost and Anna Nicole Smith, jeans with a cut-off waistband (as originally modeled by Adriana Lima), a sleeveless gingham top like the one worn by Eva Herzigova, and the daisy capri pants that Schiffer wears in the new campaign, which was shot in Sorrento, Italy. Prices will range from $39 to $138; the collection launches in Guess stores, Macy's, and online at the newly created guess1981.com in April. Here's a sneak peek at the new campaign:
Nowadays, Schiffer spends more time curating her own clothing line and raising her three kids (with her film director-husband Matthew Vaughn) than posing for the camera. Her last campaign for Guess was in 1991, and the new photos have a cool retro vibe.
"Shooting the Guess 30th anniversary campaign was like going back in time," she told Women's Wear Daily. "It brought back so many great memories and has been a lot of fun working together again with Ellen and Paul."
via: yahoo
Posted by News Hump at 14:08