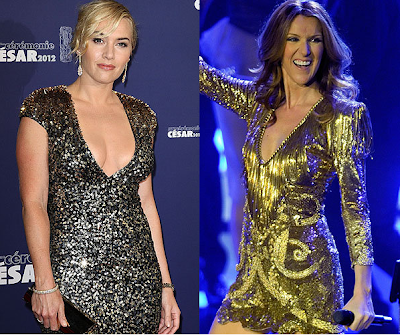 Kate Winslet's harsh words about 'Titanic' song, Kate Winslet: Celine Dion’s ‘Titanic’ Song Makes Me Want to Throw Up, The star says an ugly feeling overcomes her when she hears Celine Dion's "My Heart Will Go On." There is no love lost between Kate Winslet and Celine Dion's "My Heart Will Go On," the theme song to her 1997 blockbuster, "Titanic." The Oscar-winning actress was asked her thoughts on the inescapable track during promotion for the 3-D release of the iconic film — and she didn't mince words. "Like throwing up," she described to MTV matter-of-factly. "No, I shouldn't say that … No, actually, I do feel like throwing up. I wish I could say, 'Oh listen, everybody! It's the Celine Dion song!' But I don't. I just have to sit there, you know, kind of straight-faced with a massive internal eye roll."
Perhaps the reason for Winslet's disdain for the song — which sold over more than 20 million copies worldwide — is because every time she walks into a bar or restaurant, someone always puts it on. "It's thrilling for people to surprise me with the Celine Dion song," she added with a laugh. Worse yet, some people have actually encouraged the "Mildred Pierce" actress, 36, to sing along. During a recent interview for a talk show in Italy, she says a pianist began to play "My Heart Will Go On" and the host "rather severely, urged [me] to go and sing it as though I had in fact sung it myself in the first place. It was like, 'No! I'm not going to do that.' They're like, 'Oh no, come on it will be funny.' No, it won't be funny. At all. And I'm not going to."
Thanks to "Titanic," it's not just "that song that shall go unnamed" that has forever haunted Winslet — so have boats in general. But not because she fears another accident with an iceberg. "I actually now get onto boats and say, 'No jokes, OK? No jokes. Can we just move on from that? And if you have any jokes, let's just get them out of the way right now. Thank you. Anyone? Jokes, jokes? OK, moving on.' And then they still tell jokes," Winslet said. The most unoriginal one? Asking the actress to reenact the "I'm the king of the world!" scene made famous by her onscreen love, Leonardo DiCaprio. Despite the annoyance, Winslet maintains good humor about it. "Oh, yeah! Oh, that one! Oh, don't worry, it's my party piece. Sure, come on up, bring your granny."
via: yahoo
Posted by News Hump at 14:58