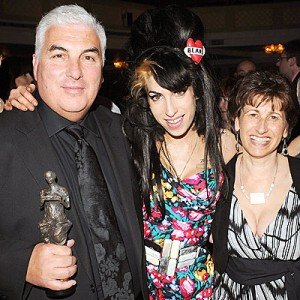 Amy Winehouse's estate settled, Amy Winehouse’s Parents To Receive Her Sizable Estate Worth $4.66 Million, The late singer's assets will go to her parents, while her ex-husband will receive nothing. Mitch and Janis Winehouse, the parents of late pop singer Amy Winehouse, will receive their daughter's estate worth 2.94 million pounds ($4.66 million), the Associated Press reports. Amy Winehouse's will Revealed:
The London singer reportedly did not leave a will, making her parents the beneficiaries of her sizable fortune.
According to probate documents, Winehouse's father is administrator of her estate. Winehouse's ex-husband, Blake Fielder-Civil, who she divorced in 2009, is not due to receive a portion of her earnings.
While Winehouse's net assets are 2.94 million pounds ($4.66 million), she left behind a total of 4.25 million pounds ($6.7 million) not including payment of taxes and debts.
The soulful singer was 27 when she died of accidental alcohol poisoning in her home on July 23.
Winehouse achieved fame in the United States after the release of her 2006 Grammy award winning album, "Back To Black," that includes her hit "Rehab." She openly discussed her struggle with drugs and alcohol.
Winehouse was dating British film director and writer Reg Traviss prior to her death.
via: yahoo
Posted by News Hump at 16:38