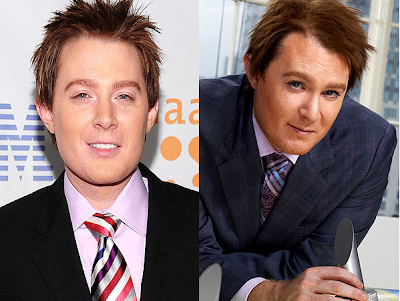 Clay Aiken's plastic surgery confession, Clay Aiken Admits to Plastic Surgery, The singer confirms speculation that he went under the knife for a few facial procedures. If you thought something different about "American Idol" alum Clay Aiken when he returned to reality television in January with a stint on "Celebrity Apprentice," well, you were right.
After months of speculation that the 33-year-old singer had gotten some sort of facial plastic surgery, Aiken came clean to "Watch What Happens Live" host Andy Cohen Tuesday night.
"I had operative surgery on my jaw for a TMJ thing and I had them suck the fat out of my chin while they were in there," the "Invisible" crooner confessed during the show's "Plead the Fifth" game" "I was like, 'You know what, while I'm already down, go ahead and take the vacuum in there and suck the fat out of my chin."
Clay's not alone in his admission. A couple of other celebs have recently admitted to getting a little medical help in the beauty department. Just last week, Susan Sarandon told People magazine she too had gotten some lipo under her chin as well as her eye, but insists she doesn't want to go overboard: "You don't want to look like a female impersonator of yourself," she told the mag. Meanwhile, "Mission Impossible" actress Emmauelle Beart, told France's Le Monde she went under the knife to get her "mouth done" when she was just 27, something she regrets.
But back to Mr. Aiken. In addition to admitting to the little nip-tuck procedure on the show, Aiken also didn't hold back when he revealed his honest opinion on the latest crop of musical talent. When asked which current pop singer he didn't think would make it past the first round of "American Idol," Aiken seemed stumped: "Oh God there are too many, too many … I've stopped listening to them because they can't sing. "
But he finally came up with a final answer. "Rihanna has some pitch problems for sure," he said, smiling. At least he's honest!
via: yahoo
Posted by News Hump at 22:44