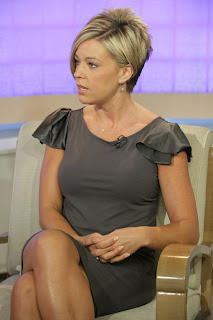 'Dancing' performer mocks Kate Gosselin, 'DWTS': Martina Navratilova & What Kate Gosselin was Really Like, The pro dancer jokes he needed "a lot of therapy" after partnering the mom of eight. Martina Navratilova is crushed after she and "Dancing with the Stars" dance partner Tony Dovolani were recently voted off the competitive dancing show. Tony, however, knows the feeling; he was voted off on season 10 when he was partnered with Kate Gosselin.

Anderson wonders, what was it really like to dance with Kate Gosselin?
"Did you just call it dance?" Tony joked after Anderson's inquiry. "We didn't dance... there was a lot of therapy involved [after that experience]."
But the feeling is new to Martina, who says she was "devastated" when she heard her name called during elimination.
"After the judging on Monday... I thought we still had a chance," Martina says. "I really wanted to last longer if for no reason than to hang out with Tony because we have such a good time."
Now Martina is out of the competition, she is hoping one of her two female friends from the show -- either Sherri Shepherd or Gladys Knight -- will win the entire competition.
"Sherry just cracks me up, she's so funny. And of course, Gladys, I've known Gladys for a long time," Martina says. "You know us girls have to stick together."
Martina also says she thinks Katherine Jenkins is the best dancer this season. Take a look...
via: yahoo
Posted by News Hump at 16:17