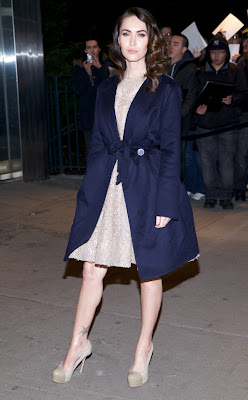 Megan Fox Pregnant Report, Megan Fox is pregnant, according to a new report. Sources tell Star Magazine that Fox and husband Brian Austin Green are expecting a child together. While this would be Fox's first baby, Green has a 10-year-old son with ex and fellow "Beverly Hills 90210" alum Vanessa Marcil. Megan Fox reportedly expecting first child.
"They just found out and are incredibly excited," Star's source says, warning that it could be a while before the couple goes public with the news. "It's still early, so they are only telling close friends and family members."
The source adds, "Megan has become a great stepmom, and Brian knows she'll be wonderful with the baby. She has really grown in the past couple of years. Megan used to only be concerned with her career, but now family comes first."
Fox appears to be very close with Green's son, Kassius Lijah. The 10-year-old served as the only witness when Green and Fox married in 2010, after six years of dating, at the Four Seasons Resort in Hawaii.
Fox recently told Cosmopolitan magazine that she and Green would be ready for children soon.
"I want at least two, probably three [kids]," she said. "I've always been maternal."
via: nypost
Posted by News Hump at 10:43