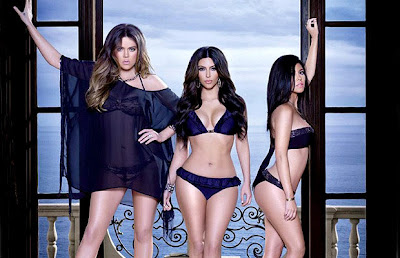 Kardashians' Swimsuit Ad Altered?, Where’s Kourtney’s Baby Bump in Kardashian Kollection Swimwear Ad?, Pregnant Kourtney looks different in the shot than she does in a vacation photo from the same period. Another Kardashian controversy! Following last week's flour bombing of Kim at the launch of her perfume, True Reflection, this time it's Kourtney who's in the spotlight.
It started on Tuesday, when her younger sister Kim posted a promo ad of herself, Kourtney, and Khloe in bikinis wearing their Kardashian Kollection at Sears. "We worked so hard designing a fun selection of bikinis, halter one-piece swimsuits, and monokinis!" she wrote. "There's definitely something for everyone and summer is just around the corner so it's never too soon to start stocking up on your summer swimwear!"
The problem? Pregnant sister Kourtney, 32, looks much slimmer in the promo shot reportedly taken in late January than paparazzi photos show her at the time.
If you recall, the "Kourtney and Kim Take New York" star announced she was expecting a second bundle of joy with her boyfriend Scott Disick on November 30. The couple is already parents to adorable 2-year-old son Mason. Kourt confessed to E! that she learned the news by taking a pregnancy test five weeks before that, which means she was — are you ready for this — about three months pregnant at the time the Kardashian Kollection swimwear pic was taken! Do you think the photo was altered? If Kourtney's baby bump was indeed Photoshopped out, why couldn't she have thrown on the bathing suit cover-up instead of Khloe? Kourtney's rep didn't respond to a request for comment. Regardless, Kourtney looks gorgeous as usual in the ad. Talk about a hot mama!
One of the people responsible for capturing the trio on film was photographer Nick Saglimbeni, who's worked with the girls many times. He revealed to omg! that this shoot was a lot of fun, and filled with tunes from J.Lo, Rihanna, Nicki Minaj, and Beyonce. "The girls are all very comfortable with their bodies and in their own skin, and they work with the same crew over and over so there is a comfort level there," Saglimbeni said. "They are so close as sisters, so it was really more of a situation where they just poked fun at each other the entire day."
via: yahoo
Posted by News Hump at 22:23