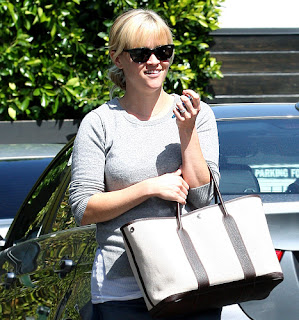 Reese Witherspoon Hides Baby Bump With Giant Purse, Reese Witherspoon's baby bump isn't ready for its close-up. The actress, who's currently expecting her first child with CAA agent hubby Jim Toth, 41, shielded her pregnancy curves from photographers while exiting the Byron and Tracey Salon in Beverly Hills Tuesday. It's no surprise, given that Witherspoon decided not to officially announce her baby news.
"[She wants to] let people figure it out," a source said when Us Weekly broke the news of her pregnancy. "She's been showing for a while."
The expectant mom, 37, who wed Toth last March at her $7 million Ojai, California ranch, is elated about adding to her brood. (She and ex Ryan Phillippe, 37, share custody of daughter Ava, 12, and son Deacon, 8). "Settling down with Jim and raising a family is what she wanted," a second insider explained.
The actress, who is around 13 weeks, is planning to take a break from acting to focus on motherhood. "She wants to have this child and take time off," a source told Us.
It's not such a bad idea, give that her last three films -- This Means War, Water for Elephants and How Do You Know -- were box office bombs. "She's not getting great offers," a source said of Witherspoon, who commands up to $15 million per picture.
A source added: "She wants to relaunch her career completely and have Jim handle it."
via: usmagazine
Posted by News Hump at 10:31