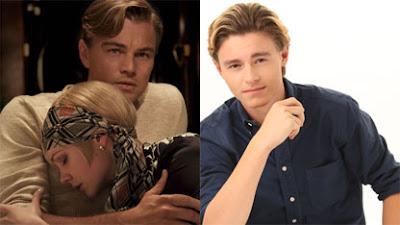 Leonardo DiCaprio's teen look-alike, How 'Gatsby' Found Its Young Leo, An Aussie actor wins a global search for the role of a younger DiCaprio in "The Great Gatsby." Given Jay's storied history with Daisy, finding an actor to play the teenage version of Leonardo DiCaprio's leading man in Baz Luhrmann's upcoming Great Gatsby adaptation was of utmost importance.
After a global search, Australian actor Callan McAuliffe (who you may remember from I Am Number Four and Flipped) won the highly coveted part. But that's when the real work began.
"I don't actually look much like Leo," the dark hair, brown eyed actor tells TheInsider.com. "So they gave me blue contact lenses, dyed my hair blonde and put it up in this coif – it's interesting how much that altered my face. It really changed the way I looked. They really put a lot of work in to making a strong resemblance."
Once the physical transformation was complete, Callan got to work on synching up his version of Jay with Leonardo's take. "I'm not playing Young Leo, I'm playing Young Jay Gatsby, but it was important to get a sense of what he was doing with the character. So Baz took me into the editing booth and I watched some of his scenes. Everyone really seemed to like my take on the character, so we just blended the two together."
And audiences will get to see the fruits of their joint labor when The Great Gatsby opens on December 25 in 3D -- a choice that initially threw Callan for a loop too. "You don't see many movies that aren't big action things doing 3D, but when we went to the first cast read-through, Baz sat us down, gave everybody 3D glasses, wheeled out this enormous TV and showed us a few sequences they'd put together. It's not like they're trying too hard. Nothing is being thrown at the camera so it flies at the audience. It's more about this fantastic color pallate – it's all bright blues and greens. The 3D just brings everything to life in a much richer way.
via: yahoo
Posted by News Hump at 21:55