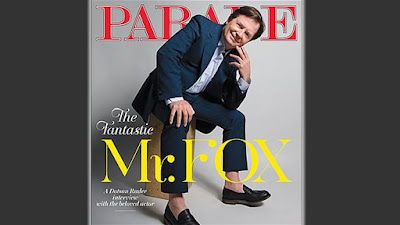 Michael J. Fox's 'dark' period with alcohol, Michael J. Fox Dealt with Disease with Alcohol, After his Parkinson's diagnosis, the star hit the bottle until his drinking began to spiral. Michael J. Fox is opening up about battling Parkinson's disease for the past 20 and how he initially coped with his shocking diagnosis.
Fox, 50, who learned he was stricken with Parkinson's when he was in the prime of his career at age 30, admits that alcohol became an early crutch. "For a time I dealt with it with alcohol, which turned out to be a disaster. I'd always been kind of a partier, but this was the first time I was drinking in order not to feel something. It had a dark purpose," he tells Parade magazine.
The Family Ties star adds: "About a year after my diagnosis, I woke up one morning and saw (wife) Tracy's face...She said, 'Is this what you want?' Instantly I knew-no, this isn't what I want or who I am. So I quit drinking in '92. I recognized I had choices about drinking, and that made me realize I had choices about Parkinson's as well."
On dealing with his Parkinson's day-to-day, Fox says he doesn't "look at life as a battle or as a fight." "I don't think I'm scrappy. I'm accepting. I say 'living with' or 'working through' Parkinson's. Acceptance doesn't mean resignation; it means understanding that something is what it is and that there's got to be a way through it. I look at it like I'm a fluid that's finding the fissures and cracks and flowing through."
On why his wife of 23 years, actress Tracy Pollan, has stayed with him, Fox gives his wife a lot of the credit. "We've been very blessed and haven't had a lot of big challenges other than Parkinson's. Tracy knows she can count on me when there are issues we face. We still love each other and make each other laugh, which is probably the most important thing. She still thinks I'm smart and funny and sexy."
For more from Fox's interview -- including the revelation that he thought he was "terrible" in Back to the Future -- pick up a copy of Parade this Sunday.
via: yahoo
Posted by News Hump at 09:59